Historical Clothing for Sitters at the ROM's New Fashion Exhibition

Recently, the Patricia Harris Gallery of Textiles & Costume at the Royal Ontario Museum had been closed in preparation for a new exhibition. As a volunteer who is personally a bit more on the introverted side, I'm always aware of what goes on there, seeing as it is one of the quietest and most tucked-away areas of the museum. Well, as of June 21, it's re-opened with not one, but TWO new exhibitions. The first, Cairo Under Wraps: Early Islamic Textiles features some fascinating textiles and clothing from the 7th to 14th centuries. However, this post is about the second new exhibition that's opened up: Fashion Follows Form: Designs for Sitting.

The exhibition focuses on the work of Canadian fashion designer Izzy Camilleri, especially her line IZAdaptive, which was developed specifically for the convenience of wearers in wheelchairs. To do this, she drew off historical examples of clothing that were also designed with sitting in mind: riding habits, breeches/trousers, bustles, etc.

Now, I do not yet have images of Camilleri's own designs and pieces just yet: history nerd that I am, my first visit to the exhibition focused primarily on her historical sources of inspiration. So, here are some of the highlights from that particular subset.

Here, we have a 1770s English riding habit that was designed for a woman to wear sidesaddle. You can see that it was made in multiple pieces that simulated the coats and waistcoats worn by men. However, shorter's women's jackets were worn during the 18th century as well, so it's not simply about emulating menswear by any means. 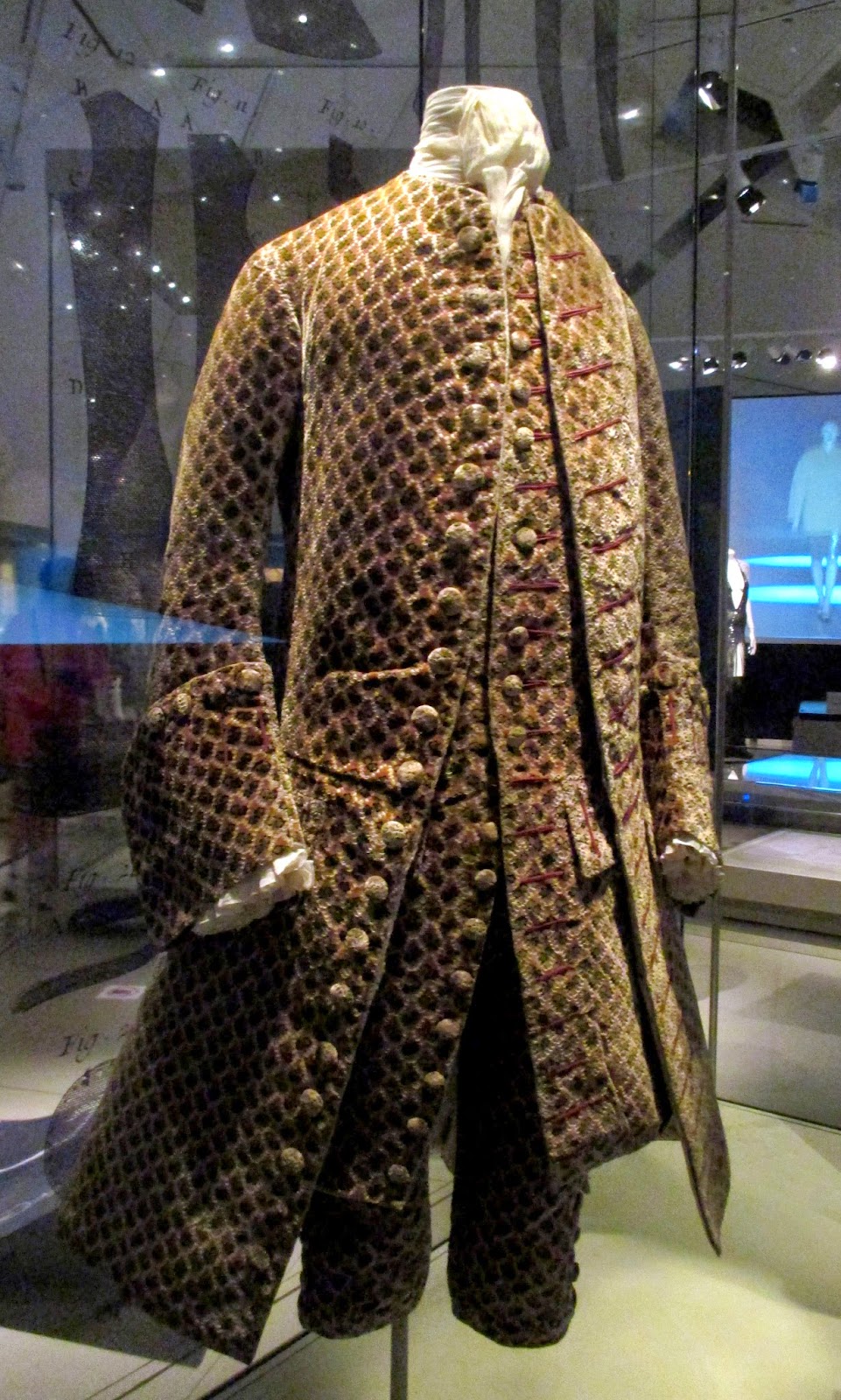 Speaking of 18th century menswear, this was also a piece that was displayed as part of the exhibition. It is also English, and dates back to 1750. What served as Camilleri's inspiration here were the breeches. 18th century breeches were tailored very closely to the wearer's thigh. But can you imagine wearing skintight breeches made out of silk, wool, cotton, or linen? Those fabrics were less forgiving and elastic than today's synthetic materials, so trying to move in something that was too tight would be a wardrobe malfunction waiting to happen. So, in order to give a reasonable amount of manoeuvrability, 18th century breeches were also cut to be quite baggy in the rear.

You can really see the bulk in the derrière on this example: a pair of American breeches made between 1775 and 1799. So what's an elegant 18th century gentleman to do? Well, the long, flared skirts of the coat would have covered up this unsightly concession to practicality, thus enabling the wearer to keep up the well-tailored silhouette favoured at the time.

In fact, the coat's skirts also served another purpose re: sitting. There are slits on the side and back of the coat that allowed the skirts to be spread outwards while the wearer was seated (ex. in a chair or on horseback). This meant that sitting down did not entail sitting on a bunched up mass of fabric: again, a design created for comfort.

(On a side note: those slits also made it easier for the 18th century gentleman to wear his sword, which was a key part of formal court dress at the time!)

Now, moving on to one of the classic moments in 19th century women's fashions: the bustle. 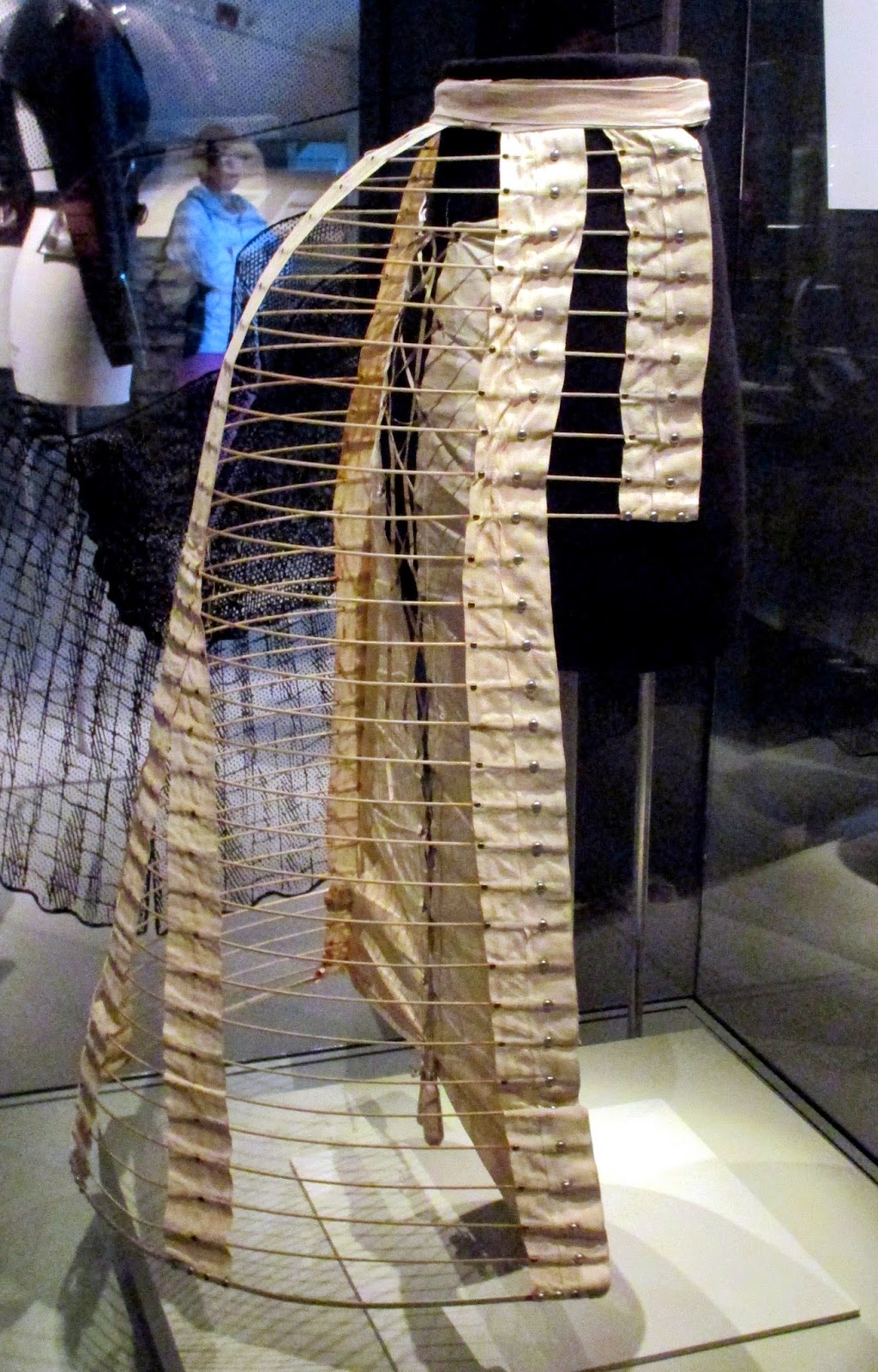 This 1880s bustle was made in Canada, and is an example of the underpinnings worn by women in the latter decades of the 19th century. The bustle created a silhouette that emphasized the rear: instead of a bell-shaped skirt, the fabric would be swept backwards to drape down to the floor. Such a look, one would imagine, would make sitting difficult. But in this case, the bustle's structure made things easier: it is made in the style of a crinoline: rather than a solid piece, there are a series of metal pieces connected by strips of fabric. This meant that the bustle had sufficient give and freedom of movement to make it capable of bending when its wearer sat down. 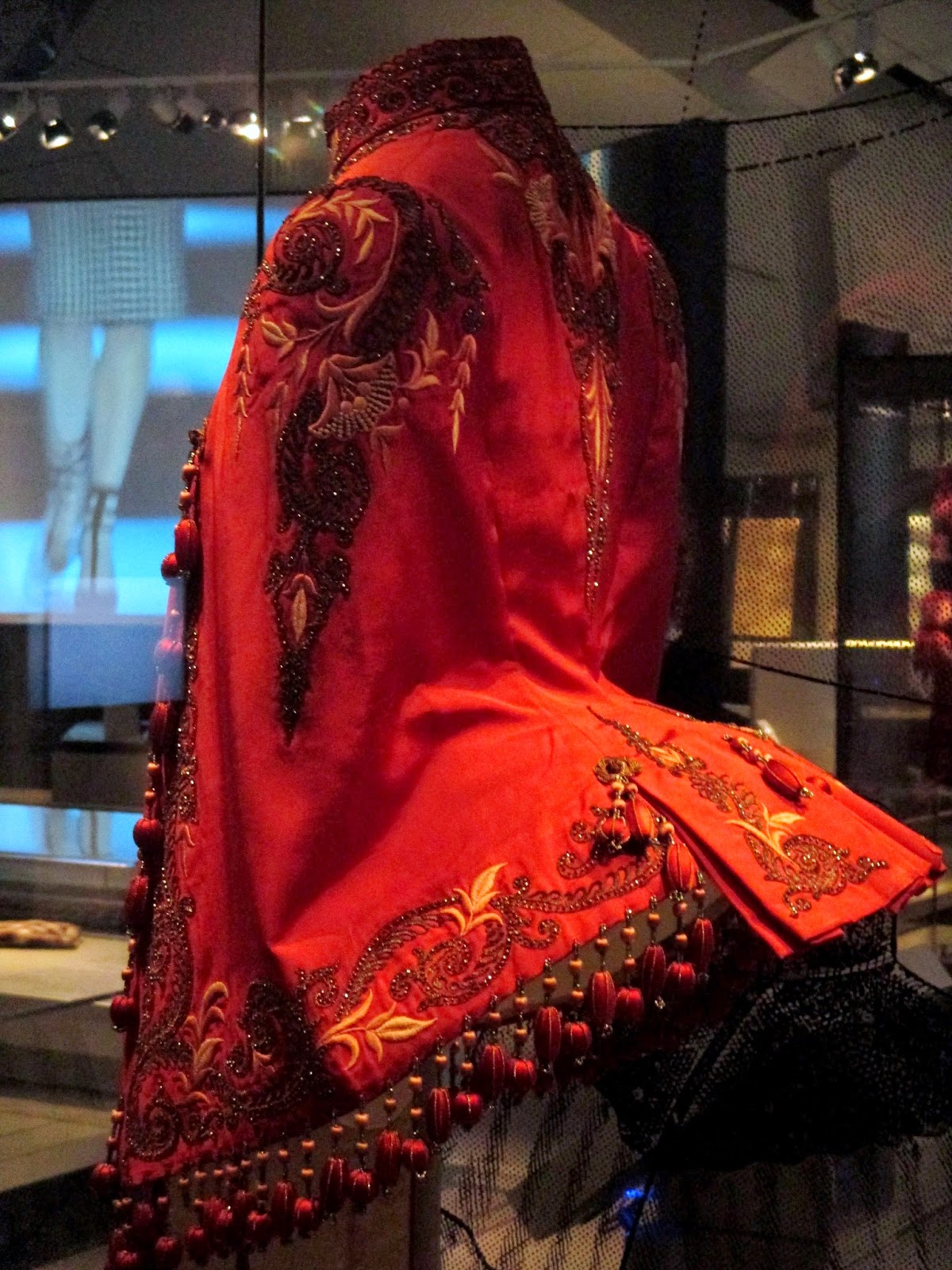 Following along with the bustle silhouette, jackets like this 1887 dolman (of either English or American origin) were designed to flare outwards in the rear as well. Pretty, eh?

So where am I going with all of this? Namely that fashions for sitting are not a recent concession for accessibility or ergonomic purposes. There are plenty of historical instances when people have done the same, seeking to combine fashion with considerations of practicality. Yes, I know that from a 21st century perspective, the vast majority of 18th and 19th century fashions would not seem practical - but these pieces, in the eyes of their original wearers, were.

Just posting to wish all my friends and followers a happy Canada Day. Yep, today, July 1, is Canada's main national holiday (unless you're in Quebec, in which case Canada Day vies for that honour with Saint Jean Baptiste Day - June 24 - but you get the idea). So it's the time when people commemorate Confederation and the creation of Canada as an independent nation on July 1, 1867.

BUT...I'm not actually IN Canada. Just my luck, I'm actually writing to you all while on vacation in the good ol' USA. I certainly haven't forgotten to showcase my Canadian pride, but since the outfit that I brought with me that's red and white also has some (very dark) blue in it, I daresay I look more like a Team USA fan today than a Canuck. This is what happens when Canada Day falls on the same day when the States is playing a World Cup match ;)

So, right now, I'm actually quite reminded of the line from the song "Canada's Really Big" by the Arrogant Worms: "So big we seldom bother to go see one another; although we often go to other countries for vacations..." Given that, I decided that for this year, I'll have some fun with you all for Canada Day and share some of the neat things that I've found over the years on the Internet that poke a little bit of fun at Canada and Canadians. After all, our stereotypes are harmless for the most part, so many Canadians do take some joy in laughing at themselves. Hope you enjoy these - and have a good Canada Day!

There was a meme like this going around on YouTube a while back, and here's some Vancouverites' Canadian edition:

C'mon - I wouldn't reference this song without showing you what I meant! Also, little Canada Day challenge to any Hetalia fans out there: get through this video with a straight face. First one who succeeds, please let me know!

This one, in my opinion, is a bit of a classic by this point - and it's definitely one of my own personal favourites.

This one is the classically quintessential Canadian self-parodying commercial. It's quite old, but people still like it to this day.

This is a TV commercial that aired two years ago for the 2012 London Olympics. However, I think it's a humorous take on Canada's vast landscape and definitely worth a look.

Okay, this is not, in fact, by a Canadian artist; instead, it's Weird Al Yankovic's parody of Green Day's "American Idiot". However, since most of the Canadians I've come across who know this song think it's funny (and not offensive). So here you go anyway!

Again, this one's actually by an American artist. But, again, I think it's funny - so enjoy!


And I think that's enough watching/listening to last you all a while! Once again, wishing everyone a safe and happy Canada Day, and I promise I'll get back to my more serious programming soon :)
Posted by Kita Inoru at 16:16 1 comment: