It has been some time since I have last posted here, but I can assure you that I have been hard at work studying, reading, etc. So I hope that this will only benefit and enhance future posts, and I want to thank you for your patience these past several months :)

Recently, the city of Toronto has become a multiculturalism enthusiast's dream with the hosting of the Pan Am Games in July. We have had many tourists from abroad (some of whom I have had the pleasure of interacting with at the Royal Ontario Museum), and there are many ethnic and cultural events scattered around the city for the public to take part in.

Of course, celebrations of ethnic identity are not straightforward: along with the pleasure, there is often pain. We can say we appreciate others' cultures all we want, but with that, we also have to hear people out on the issues and challenges they face, oftentimes because of those identities.

Because of this, I find it interesting that after several months' worth of hiatus, I return to my volunteer post at the Royal Ontario Museum to a number of new exhibits and installations in the Canadian galleries where I work. One of these, Worn: Shaping Black Feminine Identity by Vancouver-based artist Karin Jones, is particularly noteworthy for the ROM initiative it is part of: Of Africa. 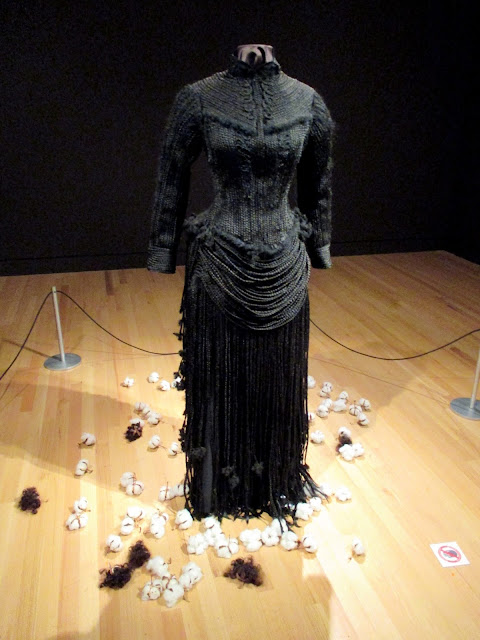 Of Africa is a ROM project several years in the making, aimed towards presenting a more diverse image of Africa and its diaspora, dispelling the myth that the African continent is culturally monolithic (i.e. that all Africans can be grouped into a single culture). Also, the use of contemporary modern art will also showcase the vitality of African cultures: they are not trapped in some distant past, but incredibly vibrant and open to creative expression and innovation.

Worn, appearing as it does in the Canadian gallery, is meant to speak about the historical and contemporary reality of African Canadians, working in juxtaposition to the artifacts from European settlement that surround the temporary exhibition space in the rest of the gallery. The art installation is a dress made of synthetic hair in a style evoking the late 19th century bustle dress associated with the Victorian era. In the following pictures, you can see the intricate detailing of the braided hair. In this, we see Jones' argument that African arts (as exemplified through the braiding) are just as beautiful and refined as the European decorative and fashion arts that our society so admires. 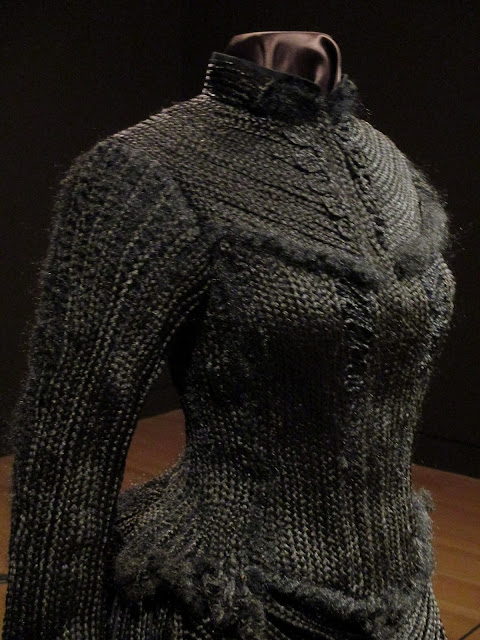 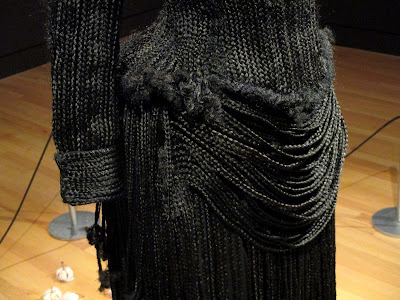 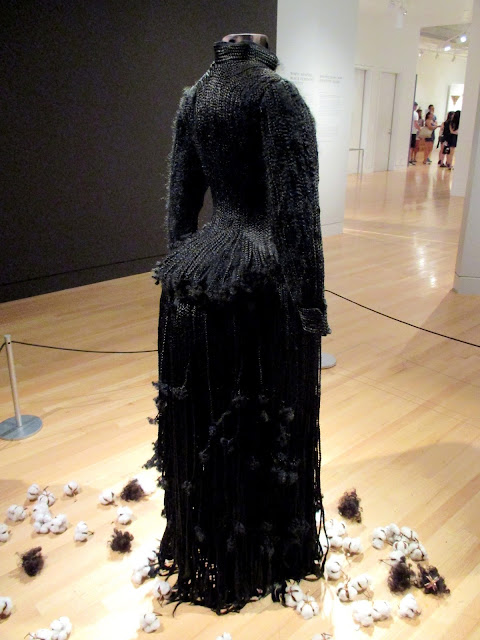 You may note that the dress is black. This is not only because of the colour of the synthetic hair, reminiscent of African and Caribbean braids, but because the Victorian dress Jones meant to emulate was a mourning dress. In her own words:

For me, the Victorian mourning dress is a symbol of sadness, "high" culture, the British Empire, and the imposition of feminine beauty norms.

I wear my African-Canadian identity much as a Victorian woman would have worn this type of dress: proudly, but uncomfortably, shaped and also constrained by it.

Note as well the way the dress is displayed. Cotton balls and hair bolls are scattered upon the floor, testament to the role that Africans have played in the construction of the European empires and the settler colonies that now form today's First World - including Canada. 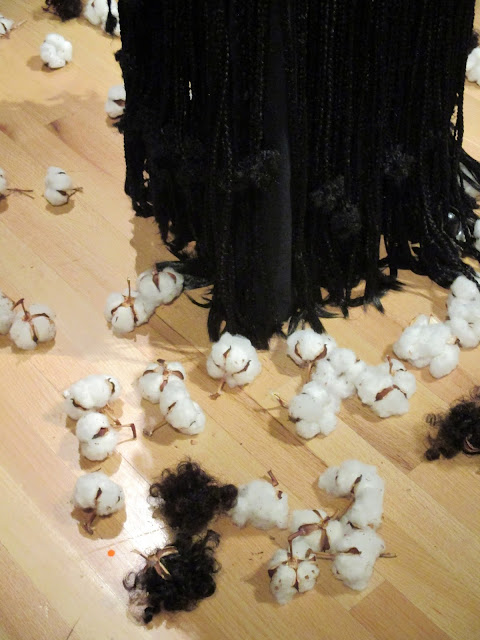 Canadians may speak of the abolition of slavery and the Underground Railroad that allowed African slaves in the United States to find freedom, but we also cannot forget that we, too, have benefited from the "invisible labour of thousands of Africans": not just in the 19th century at the height of the British Empire, but also into the present day.